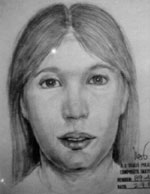 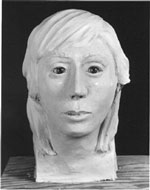 On December 10, 1988, while local residents gathered to help clear a parcel of land that runs along the Sandy Hook Bay in Atlantic Highlands for a bicycle trail, a local volunteer found what he at first thought was a plastic ball, which turned out to be a human skull. The resident reported the find to the Atlantic Highlands Police Department who began an investigation into this found human skull.

An anthropology examination was performed upon the skeletal remains, which were identified as a:

The decedent was found to be wearing the following:

additional items near the remains:

A botanist reviewed the scene and clothing in the skeletal remains and estimated the body had been in that same location for approximately the previous fifteen years. This would put the year of death at approximately 1973 to 1975.

An investigation by the Atlantic Highlands Police Department was conducted in an attempt to identify the human skeletal remains. The human skeletal remains were mapped out and placed in the National Police computer system for all law enforcement departments to compare to their missing persons. The local media from the tri-state area converged on the small town of Atlantic Highlands and broadcast the human skeletal recovery for about four straight days. Massive medical coverage was aired and a special program called Crime Beat highlighted this case. No identification was made.

In 1992, with the assistance of the FBI, a clay reconstruction was made over the human skull and is a possible resemblance of what this recovered female skeletal remains may have looked like. Additionally, several parts of the skeletal remains were sent to LabCorp in Research Triangle Park, North Carolina for mitochondrial DNA profiling in 1997.

The Monmouth County Prosecutor’s Office and the Atlantic Highlands Police Department now have a DNA profile that can be used to link this female subject to a family member as well as dental records.

Anyone with information concerning this matter is asked to call the Monmouth County Prosecutor’s Office at (800) 533-7443 or the Atlantic Highlands Police Department at (732) 291-1212.

Anyone who feels the need to remain anonymous, but has information about a crime can contact Monmouth County Crime Stoppers confidential telephone tip-line by calling (800) 671-4400; can text “MONMOUTH” plus their tip to 274637; or, they can email a tip via the website at www.monmouthcountycrimestoppers.com.  Monmouth County Crime Stoppers will pay up to $5,000 for information leading to the arrest of criminals and fugitives.